A big win against tough odds.

For the past three years, Girls Inc. of Memphis’ girls and staff worked in collaboration with community members and partners to prevent the building of a landfill right next to their youth farm and local elementary school in Frayser, a neighborhood in northern Memphis. In January 2018, their City Council unanimously voted “NO,” rejecting the application to build the landfill.

A David and Goliath Story

Sonja Breda: This was a three-year long fight against really steep odds!

SB: What would you say to other people thinking of taking on a project like this that takes a long time but has a huge impact?

LM: Really, absolutely the biggest, biggest, biggest advice I can give is form a strong coalition of committed stakeholders. Coalitions work! Seek out community members, other non-profits, schools, civic groups, and faith-based groups to mobilize around the advocacy issue you are working on. I’d also say actively provide your girls with all the information about the advocacy issue and give them space to make their own decisions. Give them the tools to be active in the process alongside adult and community allies. No one can do it alone. You have to form a strategic coalition that is equally committed to fighting.

SB: So I understand that your girls were very engaged in this campaign. Why is it important to engage and prepare girls for advocacy?

LM: Young people’s voices have IMPACT! The greatest moment in advocacy work is when the girls themselves take a lead and speak their truth through calls, letter writing, and public speaking.

SB: I understand that this three year long campaign was contentious at times. How were you able to keep your girls safe in a struggle that got pretty ugly at times?

LM: Well part of it was modeling the way. Every meeting I went to where the girls spoke, I spoke as well. So we ran it together. The girls were fully informed of the issues. So it was really about articulating what you believe and then letting the rest happen. We told the girls, “you’re not always going to be understood but there are so many people on our side.”

The girls grew in leadership…

SB: Did you see the girls grow and change a lot throughout the process? I know there were different groups of girls that worked on this win over the years. 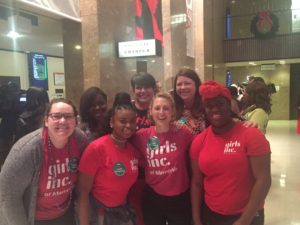 LM: Yes, I absolutely have seen them grow. One of the components of the Organic Farm program is that the girls go to the Frayser Exchange Club [a coalition of stakeholders advocating against the construction of a landfill] meetings as a group and every week they have to speak to the group about what is going on at the farm. Every week a different girl has to give the update. From the very beginning of the program the girls have had to be in a public, community-based leadership role that’s really uncomfortable for them.

Our favorite story is around a girl who stood, and was supposed to present, and just froze. The group was like, “it’s okay, you can do it, you can do it.” She just stood there until someone finally said, “what are you growing right now?” And she said, “okra” and sat down. And everyone cheered. From that summer to the next spring she won one of our girl awards, which means you can speak at our celebration luncheon in June in front of 600 people. And she slayed it! No notes, she just told her story. And it was beautiful.

You know, once we were at a meeting, sitting there, and one girl was like, “I’ve got to say something.” I say to her, “just go, just get up, walk to the front, and say what you need to say.” And she did it. She absolutely did it. She realized she could do it.

This growth happens through the Girls Inc. Experience, and through being very intentional in our programming

SB: In other words, the whole program, including advocacy, facilitates that growth?

LM: Correct. So then when something like this [advocacy project] comes up, they’re like, “oh yeah, we got this, let’s do it.”

SB: What’s an example of a way that girls got engaged?

LM: One example speaks to the power of the thank you note! Decision makers get a lot of input on what they do wrong and what position their constituents want but, apparently, they rarely get thanked. After the landfill vote, our girls sent individualized hand written thank you letters to each city council member. Last week I got a beautiful letter from a council member to our girls that had sent him his letter. It spoke to the power of civic engagement, and how impressed he was with the girls of Girls Inc.

Advice for other Girls Inc. affiliates

SB: Some affiliates may be scared to engage in advocacy projects like this because they’re worried about losing donors or alienating board members. Did you have these concerns at any point?

We also need to keep lines of communication open with our board members. As advocacy opportunities occur, we should include the board by keeping them informed and invite them to participate in the advocacy mobilization.

What the organization stands for

At this point in my life I’m pretty clear about what I stand for and what this organization stands for. I’m going to fight for people that don’t have a voice and fight to give them voice. If you have a board that’s not in support of things that are critically important to girls then they don’t align with our mission and you need to recruit to that. You just have to be bold.

We also need to intentionally seek funders that are in alignment with our values and be willing to say no to those that aren’t. If you are going to take a stand, you need to seek individual donors and philanthropic organizations that are passionate about you and what you stand for. Our advocacy stances won’t be popular with everyone, but I’ve realized there are enough people on all sides of any issue that if I have a donor that is troubled by what we are doing, and leaves, then I’ll find another who is inspired by what we are doing. You know what I mean? For every one donor that leaves, there are probably 12 that are thinking, “wow, Girls Inc. has got it going on. I want to be a part of that.”

What this win really means…

SB: This is really incredible work that you’ve been able to accomplish over the past couple of years. This is not just about one landfill, right?

LM: Yeah. It’s about fighting environmental racism, plain and simple. The landfill proposal showed a complete disregard for low-income communities and people of color. And the fact that we were able to be heard against all odds was extraordinary.

SB: Did you have moments of doubt? 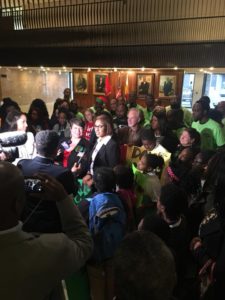 There’s a young man named Will, who at the age 23 had already been in and out of jail because he was stealing to feed his siblings. His mother left and he got kicked out of high school because he was always late for taking care of his younger sisters. He is one of the kindest, most caring individuals I’ve ever met.

At one of our public meeting he got up to speak. I think all of his childhood trauma was triggered and he was getting angrier and angrier and more upset and more upset with each word. Towards the end of his speech, he said something that I’ll never forget. He said, “I, like my family members, went to Whitney Elementary School. We’re told by so many that we’re no better than trash. And now you’re gonna put a landfill beside our school to look at every day that proves it true.”

So I called him over and he sat down next to me and I just held him, held him. I put my hand on his heart, my other arm around his shoulders. His heart was just beating a mile a minute and he says to me, “you know, Lisa, they just keep doing this to us. Why do they keep doing this to us?” And he started to cry.

I promised him over and over again that we were going to win this. Driving home, I had a very deep, rich conversation with my God that I had to be able to keep that promise to him and to our girls. And that’s why I never wavered.