To mark the 100th anniversary of the 19th Amendment, Girls Inc. addresses the racial disparities of the milestone and celebrates unsung sheroes of color.

As part of our She Votes 2020 initiative, which helps girls realize the power of their voices and learn about the structure and role of the U.S. government, Girls Inc. is taking the opportunity to address the 100th anniversary of the 19th Amendment, which falls on August 18, 2020. While it is important to mark the occasion, it is also crucial to address the racial disparities of this milestone. 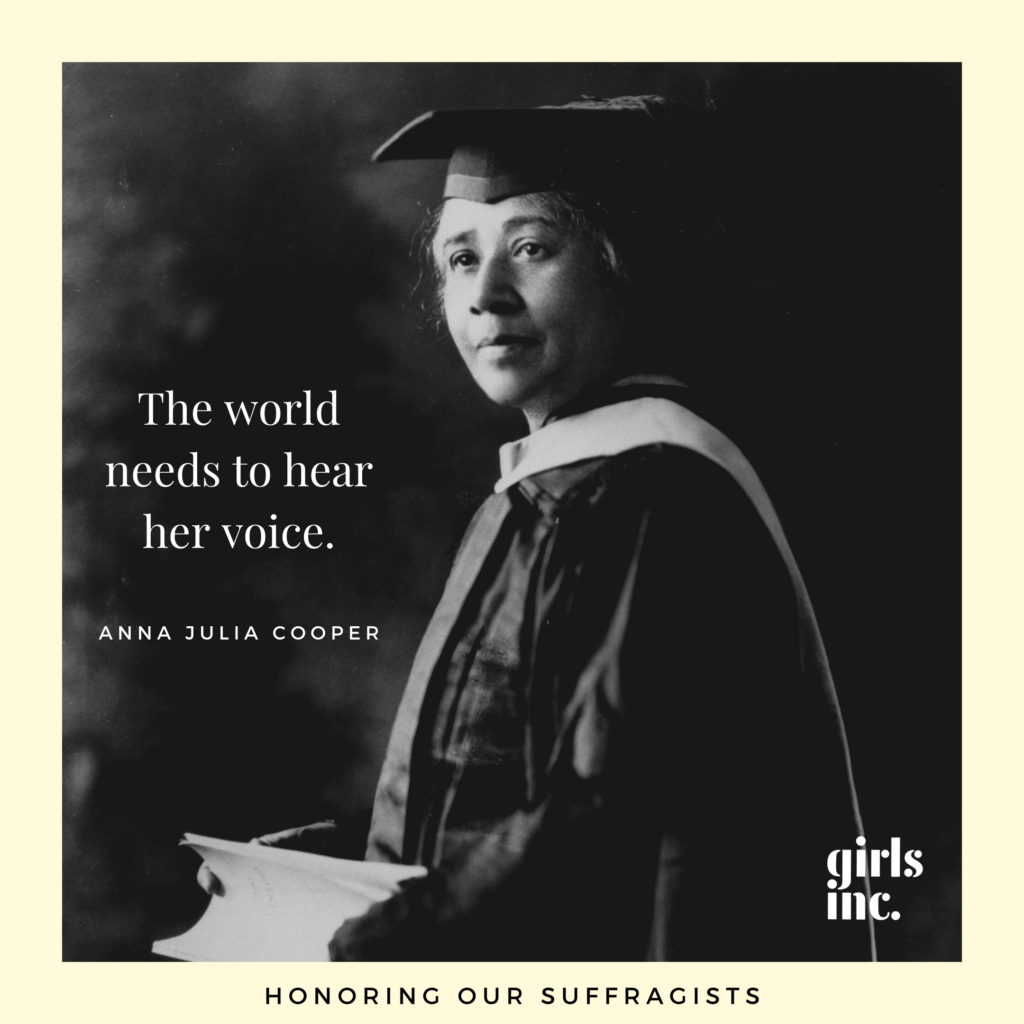 The 19th Amendment was, at best, an incomplete victory. It formally granted all women the right to vote but barriers to the ballot box remained. Discriminatory practices blocked most Black women, indigenous women, and women of color from exercising their right. Though Black women activists and suffragists of color stood side by side with white reformers, campaigned fiercely on behalf of change, and were vital to both the ratification of the 15th Amendment (giving some Black men the vote) and 19th Amendment, they were not granted unfettered suffrage until 1965 with the passing of the Voting Rights Act, which made racial discrimination in voting illegal.

As girls take the lead and demand great change for the betterment of our world, so must we as adults and organizations that support them. In relation to the 19th Amendment centennial, that means addressing historical inaccuracies around what is sometimes characterized as the ‘victory’ of the amendment and honoring the contributions of Black women, indigenous women, and women of color who were also essential in getting us the vote. 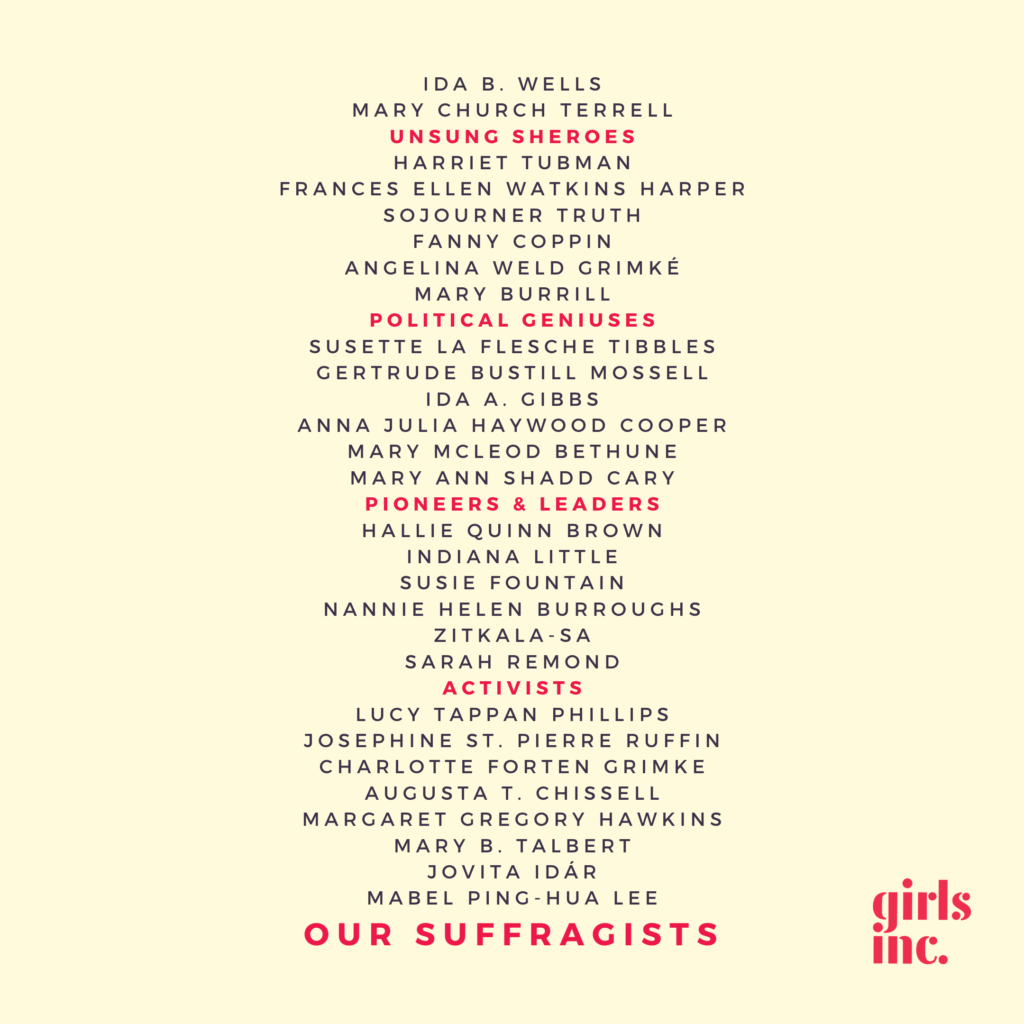 The recorded history surrounding the 19th Amendment ratification has allowed many Black women, indigenous women, and women of color who were instrumental in the suffrage movement and their contributions to go unacknowledged. To that end, Girls Inc. is taking the opportunity to highlight Black suffrage leaders; to contextualize the 19th Amendment as one event among many along the road to the vote for women; to celebrate Girls Inc. girls as informed voters and soon-to-be voters; and to acknowledge how voter disenfranchisement continues today in many of our communities. 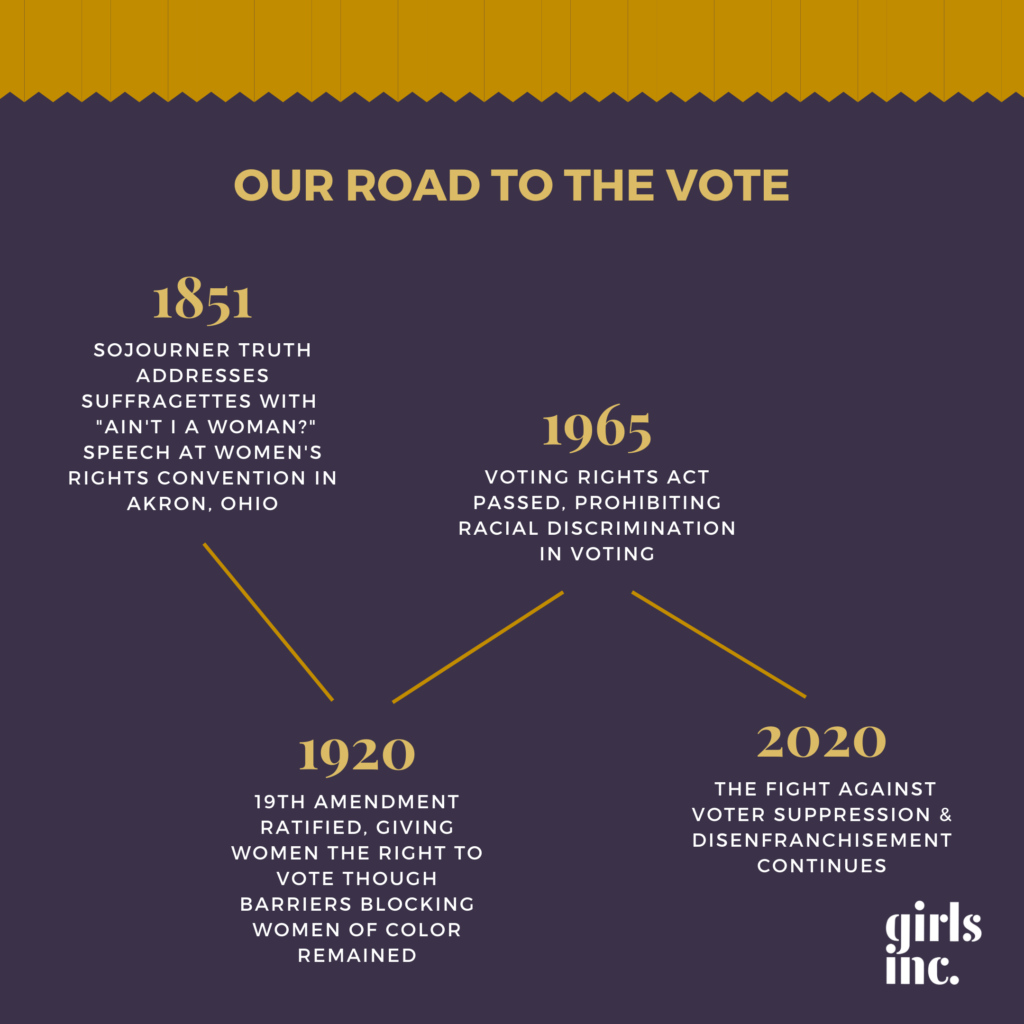 The racist and elitist injustices perpetuated during the Suffrage Era are paralleled today by voter suppression through the implementation of voter ID laws, which require one to have a photo ID in order to vote; and voter purges, which remove one’s votes if they have not voted in two previous general elections. These requirements have disproportionately affected people of color and people in low-income communities.

Young people of color face additional barriers. Mail ballots, which many young people complete (as well as first-time voters and people of color), have been found to be rejected at a higher rate than in-person ballots, says the U.S. Election Assistance Commission. Tougher voting rules, difficult absentee ballot procedures, and irregular school and work schedules serve as additional obstacles to young people exercising their right to vote.

Across Girls Inc., girls are participating in She Votes activities to gain skills and confidence as future voters, candidates, and political leaders. Some girls are poised to cast their vote for the first time this year. Others are just starting to learn about the role they can play in our democracy. But at every age, Girls Inc. girls lead. During this historic milestone we celebrate them most of all, because without the voices of girls and women, our democracy is incomplete. Together we carry on the legacy of our women suffragists by letting our hopes and voices shine through with our vote, and by taking action in our daily lives to fight for a more just and equitable future for all.